Missing variable games are a great way for students to practice finding the value of a missing variable in a fun way! This is a skill that is hard for some students, especially when the first number is missing. Printed it out on colored card stock and students will love playing this game over and over. I use this game for introduction to variables all the way through elementary school just for fun and good practice.

Let’s play a game that will help kids enjoy learning about VARIABLES in grades 3 through 5!

Great for playing with Beast Academy 3! Check out my suggested syllabus for using Beast 3 HERE.

1) Print and laminate cards and game boards. Cut out cards. One board per student. One deck of cards per four students. (To save printing, students can make their own board on paper or a lap white board.)

2) You can play with two to four people.

4) Pass out seven cards to each player. (Five cards if playing with more players.) 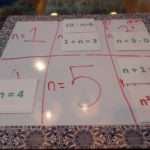 6) Lay one match (2 or 3 matching cards) on a turn. Draw one from the draw pile when finished. Player can’t play on others played matches until they’ve played at least one match of their own.

7) Matches are put into the middle of the table for all players to add matches to. After a player has placed one match of their own, they are free to play on other players’ matches as well. Each match can have up to three cards matched to it. 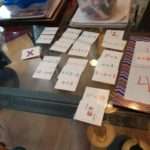 8) To win, the player must get rid of all their cards, or, failing that, have the lowest combined score when you sum up all of your  remaining ”n’s” after someone goes out.

9) A joker is substituted for any number, but it counts as 30 points if it is still in a player’s hand when the game ends.

10) If a player cannot place a card into one of the existing runs or groups on her turn, she must draw a card from the pile.